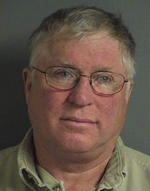 A landlord in Iowa City is accused of spying on his female tenants. Lieutenant Doug Hart says police were called Wednesday morning to an apartment complex at 639 Lucas Street by a woman who noticed a peep hole next to a vent fan in her bathroom.

“She observed a hole in her bathroom while she was toweling off and I believe she observed somebody behind the hole,” Hart said.

The woman identified the peeping Tom as her landlord, 63-year-old Elwyn G. Miller of Iowa City.

“He does have other properties in Iowa City and as part of our investigation, we are following up with those other buildings to see if there are other potential victims,” Hart said.

For now, Miller is charged with one count of invasion of privacy, a serious misdemeanor punishable by up to one year in jail.

Miller owns three properties in Iowa City, the 12-unit complex at 639 Lucas Street, a four-unit building at 637 Lucas Street and a duplex at 1024 Burlington Street. The police complaint indicates Miller was “looking in on several apartments on multiple occasions.”