You are here: Home / News / Paul Ryan: “This is not what a real recovery looks like.” 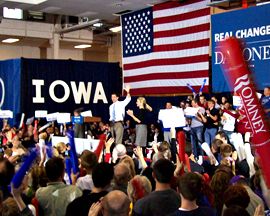 Republican vice presidential nominee Paul Ryan told a crowd in Cedar Falls Friday afternoon that the country has a “jobs crisis” and the October unemployment rate of 7.9 percent is an illustration of President Obama’s failure.

Ryan began his remarks, though, with a plea for donations to the Red Cross to help those who were hit by Hurricane Sandy.

“Let’s just say an extra prayer t0oday for them,” Ryan said. “And let’s remember that they do need our help.”

Both presidential campaigns are making a furious pitch for votes in Iowa in the closing days of the 2012 contest.

“So I’ve just got a question: Iowa, are you going to help us win this thing?” Ryan asked in Cedar Falls this afternoon and the crowd erupted in cheers. 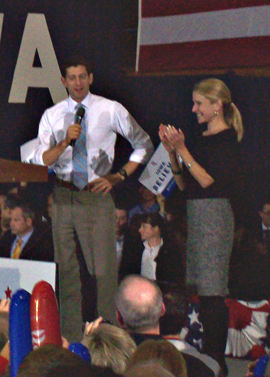 Before Ryan arrived this afternoon in Cedar Falls, John Ondrasik of “Five for Fighting” performed for the crowd. Ondrasik urged the crowd to go out and convince an undecided voter to cast their vote for Romney.

“You might say, ‘You know, this guy Mitt Romney and this Paul Ryan guy with the really good hair, he actually has a plan to address the debt,” Ondrasik said. “It’s true and here’s the thing: when you have a plan that means you recognize there is a problem.”

Ondrasik played some of his band’s hits, including their 2003 chart topper “100 years” — and changed the last chorus to “four more days” to signify the dwindling campaign clock.