You are here: Home / Health / Medicine / New charity fund drive seeks to get kids to be healthier 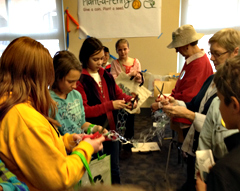 Supporters of Plant-A-Penny cut a “ribbon” of six-pack holders to kick off an event in Iowa City as they’re trying to end school-supported energy drink and pop consumption.

An Iowa City seventh grader is helping to launch a new type of charity fund drive which he calls an alternative to those that collect pull-tabs from pop cans.

Twelve-year-old Daniel Burgess says “Plant-a-Penny” empowers kids to consume fewer carbonated drinks and instead to get outside, buy healthier foods and to be active.

“It’s pretty much a coin drive but with a bit more to it,” Burgess says.

“Kids collect spare change and for approximately each coin they bring in or each amount of change they bring in, they plant a seed. They go out and find a seed or go to the refrigerator and get seeds from vegetables or fruits.”

He says seedlings can be planted in a student garden or in their own garden and the produce can be shared. Burgess, who attends Iowa City’s Northwest Junior High, says encouraging kids and their families to drink more pop in order to collect more pull-tabs is compounding the growing obesity epidemic.

Plus, he says collecting pull-tabs for charity really doesn’t make a lot of cents — or sense. “We wanted it to be a coin drive because for a hundred pennies, that raises one dollar but a hundred pop tabs raises six cents,” Burgess says.

“A hundred pop tabs comes from a hundred cans, that a 720-pound carbon footprint. That’s a lot.” He says an Iowa City elementary school collected more than 100 pounds of pop tabs last year from roughly 110,000 cans of pop and energy drinks.

Those beverages cost over $40,000, emitted more than 15 tons of carbon to produce the cans, and only raised $65 for the Ronald McDonald House. Burgess says, “We shouldn’t be making kids sick to help sick kids.” He explains his motivation.

“I care about the planet. I care about the environment,” Burgess says. “I want to do something and I can’t always go into a lab or find complicated solutions to species going extinct, even though that’s kind of what I want to do when I grow up. Right now, this is what I can do. I can create organizations and I can help other kids make a difference.”

Plant-a-Penny is launching a pilot program in several eastern Iowa schools with the goal of a regional and national roll-out next year using social media. He says the program is getting support from Iowa City leaders and from the Iowa D.N.R. Learn more on the Plant-a-Penny page on Facebook.