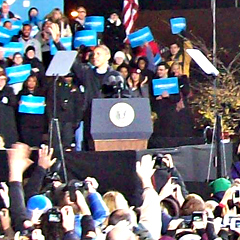 It was billed as Obama’s “last” campaign rally ever and he began it with an homage to a string of “swing” states.

“From the granite of New Hampshire to the Rockies of Colorado, from the coastlines of Florida to Virginia’s rolling hills, from the valleys of Ohio to these Iowa fields — we will keep America moving forward,” Obama said.

The Obama campaign cited a lieutenant in the Des Moines Fire Department who estimated 20,000 gathered outside for the event.

“I came back to ask you to help us finish what we started because this is where our movement for change began — right here,” Obama said, gesturing to a spot behind a set of bleachers. “Right here.”

Obama was standing on a stage, in the intersection of two Des Moines city streets, near where his 2008 Iowa campaign headquarters had been.

“Are you fired up?” Obama asked, in a cadence that became a staple of Obama’s 2008 campaign, and the crowd responded: “Ready to Go!” Obama then ended his 30-minute speech with these lines: “I love you. Let’s go vote. Let’s keep moving forward. God bless you and God bless the United States of America.”

Earlier, Obama had recounted the steps that led to his break-through victory nearly four-and-a-half years ago in Iowa’s Caucuses.

“It’s the night before the day,” Springsteen said. “…Let’s reelect President Obama to carry our standard forward towards the America that waits in our hearts.”

AUDIO of Springsteen at the Des Moines rally. 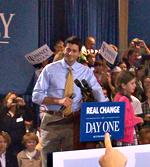 Earlier Monday evening, with a “Victory in Iowa” banner hanging behind him, GOP vice presidential nominee Paul Ryan spoke to over a thousand Republicans who crowded into an airport hangar.

“Thank you so much, Iowa. We really appreciate it. Keep it going! One more day!” Ryan shouted, as the crowd cheered and music started blaring to signal the end of his speech. “One more day!”

It was Ryan’s 12th speech in Iowa after being named Romney’s running mate in August.

“Look, we’ve kind of gotten to know each other the last few months here, haven’t we?” Ryan said last night, with a laugh.

Ryan told the crowd that in 2008, the people in Iowa and his home state of Wisconsin “liked the sound” of Obama’s “great rhetoric.”

Ryan said President Obama had been “hardly aspirational” and instead had resorted to “revenge and anger” as the reason for supporters to give him another term.Ryan spoke for just 12 minutes in order to fly out of Des Moines before the air space was closed to traffic so Air Force One could land.