You are here: Home / News / Majority of Iowa voters back Obama for second term 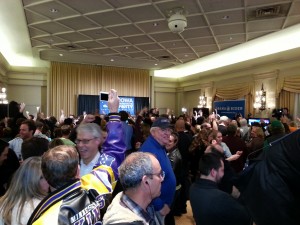 Brian Kennedy, Mitt Romney’s Iowa campaign manager, said the hurricane that hit the East Coast stalled his candidate’s momentum. “Governor Romney clearly had the momentum coming out of the debates from early October through the month of October. And what we saw was that momentum was broken last week during the hurricane,” Kennedy told Radio Iowa last night. “The news coverage shifted from the campaign to the coverage of the disaster in the east.”

Kennedy said the president took a break from the campaign and presided over the hurricane recovery and that allowed him to break free in Iowa and the other swing states — and Romney couldn’t counter the hurricane coverage.

“There’s not much you can do about it, I mean it’s a natural disaster, the president did what he’s supposed to do, which is to preside over it,” Kennedy said.

He added Romney couldn’t attack the president at that time and the focus shifted to the hurricane coverage from the economy.