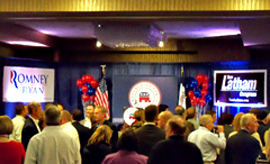 Iowa’s Republican governor says it’s time for the Iowa GOP to evaluate what went wrong Tuesday and prepare for 2014, but Governor Terry Branstad says it’s also apparent things went right for the other side in this year’s election.

“I think we need to give some credit to the president,” Branstad says.

“He started as a community organizer and there’s no doubt that he is very skilled at that, at organizing and getting his people out to vote and, of course, they came back again and again and again and they had a tremendous ground game.”

Branstad is now in the middle of his fifth term as governor and he had a campaign fundraiser last month. Branstad says he’s “keeping…options open” and may seek term number six in 2014.

“I’ve been through a lot of elections in good years and bad years and I’ve never lost, but I always say one of the reasons for is there is nobody who will work harder, that’ll go to more places and see more people than I and my advice to candidates is always to do that and I know there are a lot of candidates that worked extraordinarily hard this time and still didn’t win,” Branstad says. “But a lot of it, too, I think is message and how effective and how disciplined a candidate is in getting their message across.”

Branstad has had a Republican-led House and Senate in just two of the 22 years he’s been governor. Branstad’s prediction of a Republican tide in Tuesday’s election didn’t materialize and Democrats retained control of the Iowa Senate.

“I think we need to go and analyze exactly what happened,” Branstad says. “I mean, I was pleased with the congressional candidates. (Congressman) Latham and Congressman King both won solid victories. In the legislative races we had a lot of close races. In eastern Iowa in particular, we just had some districts that because of the strength of the Obama turnout we had some people that lost some very close races even though they ran well ahead of the Republican presidential candidate.”

Bruce Nesmith, a political science professor at Coe College in Cedar Rapids, says he was surprised Mitt Romney’s campaign didn’t dedicate more time and resources to the eastern side of the state.

“The Republicans really going back to 2008 haven’t spent a lot of time in eastern Iowa and I think that hampers the local organization,” Nesmith says. “It hampers local candidates’ ability to leverage the national candidates’ presence.”

Of the 13 campaign visits Romney made to the state in 2012, five were to eastern Iowa cities.

About 12,000 more Iowa voters cast ballots in this election compared to 2008, setting a new record for total turnout. Governor Branstad says Republicans didn’t expect Democrats to register as many new voters as they did.

“Indeed a lot of Republicans thought that, ‘Well, they’re just going to turn out the people that would have otherwise voted on Election Day,’ but it looks to me like it was more than that and more effective than that,” Branstad says. “…I think Republicans did a better job in early turnout this time and we did in 2010, but obviously we’ve got to do even better in the future.”

University of Northern Iowa political science professor Justin Holmes has been “fascinated” by the phenomenon of early voting.

“I will say I’ve been contacted by both campaigns personally,” Holmes says. “The Obama one was in person and the Romney one was a piece of campaign mail.”

Iowa may be one of the only states to record higher voter turnout in 2012 than in 2008, fueled by higher “early” voting than was the case four years ago.