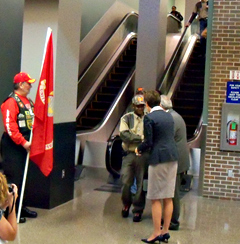 The Governor and Lt. Governor meet a Marine at the Des Moines airport who will participate in a Wounded Warrior pheasant hunt.

Four U.S. soldiers flew into Des Moines today to take part in a pheasant hunt this weekend in northern Iowa.

The hunt will take place on the farm of Bernard Becker of Lakota. Becker says the idea of inviting the soldiers to the state came in conversations with his son.

“We wanted to do something, we didn’t know exactly what it was,” Becker explained.

“My son happened to be driving through Arlington National Cemetery and he saw all these wives playing with little children on these soldiers’ graves, and they had blankets laid out and balloons. And it kind of inspired him to read a book about soldiers buried in Arlington.”

Becker says his son was back in Washington at Arlington when the bodies of the Navy Seals who died in a helicopter crash were buried, and that led them to move ahead and contact the Wounded Warriors Project.

Soldiers from that project are the special visitors for the weekend hunt.

“It’s four guys from Camp Lejeune, North Carolina, they’re all Marines. Three are purple hearts, one will soon be a purple heart. They have varying degrees of wounds… do an interview process down there and then they sort out four that could come up to this hunt that we are gonna have for ’em,” Becker says.

The hunt coincides with Veterans Day, which is Sunday. “Hunting season is in full swing for pheasants and we kind of thought it was early enough in the year it would be nice enough for them to still enjoy the outdoors, it wouldn’t be too cold, wouldn’t be too hot. And at the same time we could set up a banquet for all our local veterans, there hasn’t been anything in our area for quite awhile for Veterans Day,” Becker says.

The banquet will wrap up the weekend hunt with the Wounded Warriors. He says they will feed approximately 400 people at the banquet, and he says thanks to donations, the veterans do not have to pay anything.

The banquet is Sunday evening. Governor Terry Branstad and Lieutenant Governor Kim Reynolds were on hand to greet the four Marines at the Des Moines airport along with members of the Patriot Guard.