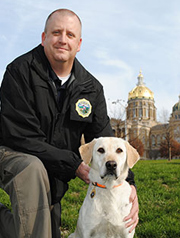 A four-year-old lab is the newest member of the Iowa State Fire Marshal’s Division. Casey is a bomb sniffing dog who arrived in Iowa Friday after a decorated deployment in Afghanistan with the U.S. Marine Corps.

“She was in Afghanistan and alerted to an improvised explosive device and clearly prevented soldiers from being injured…so she comes to us battle tested and with quite a resume,” Reynolds said.

Casey was donated to the State Fire Marshal’s office as part of a Department of Defense program for canines that return from military duty.

“It’s an excellent program, a great use of resources and saves a lot of taxpayer money,” Reynolds said. The free adoption likely saved the state up to $15,000 in training costs. Casey becomes the State Fire Marshal’s third specialized canine.