You are here: Home / Fires/Accidents/Disasters / Stratford remembers deadly tornado from 7 years ago 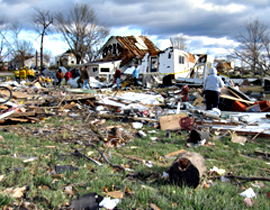 A rather unusual rash of severe weather ripped through much of Iowa on this date seven years ago. Eight tornadoes touched down in seven counties on November 12, 2005.

The small, central Iowa town of Stratford was blasted by an F-3 twister during the late afternoon.

Mike Nepereny is the town’s mayor. “It was amazing…the narrow width that it went through and how much devastation it created in the path that it took,” Nepereny recalled. “It wasn’t very wide, but it wiped out 23 or 24 houses or something like that.”

One person was killed in storm; 82-year-old Lucille Runyan. Many residents of Stratford, including Nepereny, were unaware of the severe weather threat and didn’t find out about the tornado until after it passed.

“It was a real sunny, nice day,” Nepereny said. “I was out in the country about a-mile-and-a-half (from town) and I didn’t even know that it happened. I didn’t realize it until I came to town a little bit later and it was just a big mess.” 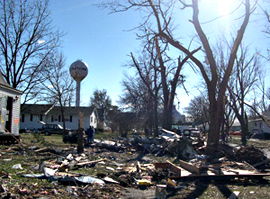 There are few signs of the tornado today, aside from tree damage, but the rebuilt homes mark the storm’s path.

“It went through the town diagonally and you’ll see new houses with older houses on both sides, so you can almost follow which way the tornado went by that,” Nepereny said.

Another large tornado that day caused major damage in the town of Woodward. The storms also delayed the start of the Iowa State football game against Colorado.

The tornado sirens sounded about an hour before kickoff and forced officials to clear Jack Trice Stadium. Nepereny remembers local firefighters and police were busy for several hours after the tornado lifted.