You are here: Home / News / House leader says Republicans will stick with their agenda (AUDIO) 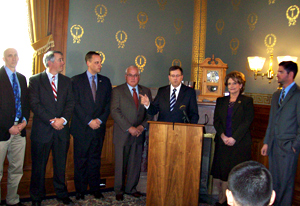 The man who led Iowa House Republicans into this fall’s election says Republicans will not adjust their core agenda based on the split decision voters made last week.

House Speaker Kraig Paulsen of Hiawatha says he and his fellow Republicans promised to keep the State of Iowa’s budget balanced, to “grow Iowa’s economy” and enact additional education reforms.

“Campaigns matter and what you say during campaigns matters and these are the things that we campaigned on, so this is what Iowans expect us to show up and work on, so that’s what we’re going to do,” Paulsen says.

Fifty-three Republicans were elected to the Iowa House, a seven-seat loss compared to the past two years, but the GOP still will control the debate agenda in 2013. Democrats will continue to hold a two-seat edge in the Iowa Senate, so any legislation must win bipartisan support.

“We’ll have to find a way to bridge some gaps with the Senate Democrats, but we have proven that we’ve been able to do that in the past,” Paulsen says. “At the same time, we’re going to maintain our principles.”

However, during a news conference this afternoon at the statehouse, Paulsen would not commit to a House vote on a resolution that would set up a statewide vote on a constitutional amendment to ban same-sex marriage. Paulsen also declined to commit to trying to advance new abortion restrictions.

“Each one of us represents an individual House district and we all have those issues and concerns that we bring forward from those House districts,” Paulsen said. “What I know today is that,,,you can expect and Iowans should expect us to go to work on growing Iowa’s economy and making sure our fiscal house is in order.”

According to Paulsen, Republicans and Democrats who ran for the legislature presented voters a similar set of promises, so figuring out what message voters may have sent in the 2012 election is difficult..

“The Obama presidential campaign clearly had a remarkable get-out-the-vote effort and so I think that probably had as much to do, if not more, with controlling the outcome…than any messaging,” Paulsen said. “…I think it’s indisputable that they put together a very, very strong ground game.”

The 53 Republicans who were elected to serve in the Iowa House for the next two years met this morning and reelected their entire eight-member leadership team. Paulsen will remain the top Republican in the House and Linda Upmeyer of Clear Lake will continue to be the House Republican Leader. Senate Republicans began meeting in private at one o’clock to select their leaders for the coming two years.