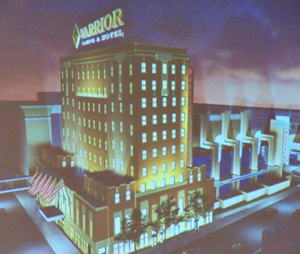 Renovating the Warrior Hotel is one of the plans for a land-based casino in Sioux City.

The three groups that are seeking the license for a land-based casino in Sioux City got the process underway today with presentations to the Iowa Racing and Gaming Commission on their financing plans.

Lance Morgan represented Ho Chunk, which plans to renovate the Warrior Hotel into a casino complex.

Morgan told the commission the financing will include $10-million from the Nebraska Winnebago Native American tribe.

“The bigger piece is from the Shakopee Mdewkanton Sioux Community, sort of known as Shakopee, I think they are really an interesting partner to have,” Morgan says.

“They are probably one of the most well know gaming tribes in the country. They operate the Mystic Lake casino in Minneapolis, and they’ve participated in a few dozen casino projects nationwide, but they’ve always done it as a lone. This is the first project that they’ve actually made an equity investment.”

Morgan says they will also get some help from the city. “We’ve entered into an agreement with Sioux City…that allows us to use TIF financing to help build the parking garages, the streets, to help move some of the infrastructure and maybe to acquire some of the land and buildings,” Morgan says. “And I think that’s a critical piece of this, that Sioux City really wants this project downtown.”

Ho Chunk will also put in $10-million to their project that has a total cost of $122-million.

Bill Warner, the president of Sioux City Entertainment, made the presentation for the proposed Hard Rock Casino. Warner says part of their financing will allow Iowans to invest in the casino. “We are expecting that to be a minimum of five million dollars to a maximum of 10 million dollars,” Warner says.

The other financing includes $90-million from Summit Partners, $22-million from the city in the form of TIF financing, $10-million from game machine manufacturers, and a $6.5-million investment from the Stoney Creek hotels company. Warner was asked to explain more about the local investment portion of the plan.

“Our plan would be to give preference to Sioux City residents first, Woodbury County residents second, overall the state of Iowa third,” he explains. “And the goal is going to be get a wide distribution of shares throughout a lot of hands so we can have a lot of participants in the success of the Hard Rock Hotel and Casino in Sioux City.”

The order of the proposals was determined by a draw at the start of the meeting and Penn National Gaming, which operates the current riverboat casino that will be replaced made the final presentation. Penn National Vice president Carl Sottosanti told the commission that their financing plan is much different because everything will come from the company.

“We anticipate funding this project from the cash flow that we generate and from the revolver that we have available to us under our credit facility,” Sottosanti says. “Equally important — and we want to emphasize this as well to you — we are not asking for one cent of municipal incentives from anybody. Not the state, not the city, not anyone.”

Sottosanti’s presentation was the shortest of the three and he took a swipe as some of the information in the other proposals as he concluded. “Today I want to leave you with this particular thought, Penn National can do this project. Nothing in our discussion today has any backup plans,any hedges, any contingency plans, you’ll note no discussion of due diligence. We didn’t mention equipment leases, we didn’t mention TIF’s, we didn’t say that the lawyers have to work on agreements and dot the I’s and cross the t’s. We are here to tell you that we can write the check and we are here to do it.”

The commissioners asked very few questions of the three groups and commission chair Jeff Lamberti of Ankeny, says there were not major red flags in the presentations. “No, I mean you always have some contingencies at this point on financing, and we’re not at a stage where we require all contingencies to be waived. We just want to see ability to finance based on the proposals that they put forth, and I think all of them met that threshold,” Lamberti says.

Two of the projects have a variety of financing methods, and Lamberti says that is something the will look at. “The way a project is financed can in fact have an impact on commission members when we get down to the final analysis. But I think most importantly is to just demonstrate the ability to get it done, and when the time comes that you have those pieces in place,” Lamberti says.

Disagreements between Penn Gaming and non-profit Missouri River Historical Development (MHRD) led to the board opening up the license process for a land-based casino. MHRD is a part of the Hard Rock plan, and Lamberti says their past history and Penn’s will not have an impact on the commission’s decision on the new license.

“No, this is a clean slate and we are going to do our best to evaluate all the projects on their own merit. And that’s what we should do,” Lamberti says. The next step in the process involves detailed presentations on the facilities themselves by each organization. That will take place at the Racing and Gaming Commission’s January 10th meeting.