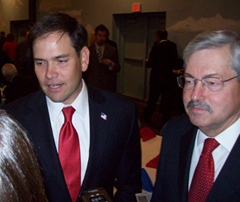 Florida Senator Marco Rubio was in Iowa this weekend, warning that the planet will devolve into a “darker” and “more violent” place if Republicans capitulate to President Obama’s demand to raise taxes on the wealthy.

Rubio is the first of what will be a long parade of potential 2016 presidential candidates making their way to Iowa.

Rubio quickly addressed the speculation when he began speaking Saturday night at a fundraiser for Governor Branstad.

“Look, let’s just address right upfront the elephant in the room, because anytime anyone makes a trip to Iowa people start speculating about what you’re going to do in the future and all that, so let me just be blunt. I am not now, nor will I ever be, a candidate for offensive coordinator for Iowa,” Rubio said and the room erupted in laughter and applause, just a few hours after the Iowa Hawkeyes lost a fifth straight game, ensuring a losing season.

Rubio soon got another round of applause from the crowd when he praised Mitt Romney and expressed the hope that Romney will stay involved in politics, then Rubio began talking about how to apply “limited government conservatism” to the problems of the 21st century, especially the plight of the middle class. 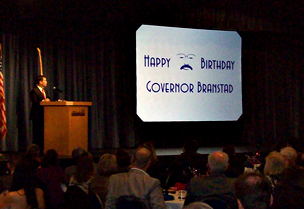 But Rubio blasted politicians who “made promises” to create more government programs aimed at poor and middle class Americans — and Rubio specifically blasted the president for saying “millionaires and billionaires” should pay higher tax rates.

(Listen to the 24-minute speech here.)

According to Rubio, capitalism and free enterprise work best by “making poor people richer” rather than “making rich people poorer.”

“If America declines, if the power of our example is dimmed, what takes its place? The answer is nothing takes its place and your children and grandchildren will inherit not just a diminished country, they’ll inherit a diminished world, darker and harder, probably more violent than its been in a long time,” Rubio said. “What’s at stake here is not just our country, it’s the way life is on this planet.”

Rubio declined to do interviews with Iowa media, although he did pause and talk with reporters for about a minute when he entered the room to shake hands with the Republicans who’d gathered for the Branstad fundraiser.

“You know I think I’ve been sensing a lot of folks just trying to figure out what this all means in this new era, with this election having passed,” Rubio said.

Rubio suggested Republicans are “frustrated” by the outcome of the election, but he said “we’re all going to move on” and “more forward.” Governor Branstad says Saturday’s event was his biggest fundraiser ever, with donors giving over half a million dollars to his 2014 reelection campaign.