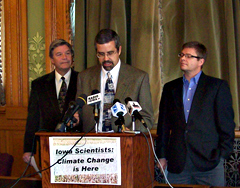 A group of Iowa scientists says this year’s drought is a “teachable moment” about the economic and environmental impact of climate change.

An “Iowa Climate Statement” was released today by 138 scientists who work at 27 colleges and universities in the state.

David Courard-Hauri is chairman of Drake University’s environmental science and policy program. He says as “carbon pollution” continues to grow, there will be an increase in “extreme wet and dry events” in Iowa.

“Weather varies too much and has too many drivers to attribute any particular event to a single cause like climate change, but there is a clear pattern of crop loss and property damage from increasingly frequent events like flooding, drought, and dangerous storms,” he says.

“We don’t face a choice between our economy and the planet. The choice is between addressing the causes and effects of climate change or spending ever more money cleaning up from events like we’ve seen in the past several years.”

“Since 1981, the likelihood of severely wet springs has more than doubled. What was once a one-in-10-year wet spring is now occurring two to three times in every 10 years,” he says. “Yet 2012 reminds us that dry summers can still happen. The 2012 July and August statewide rainfall was the lowest since 1976. It was even lower than 1988.”

Jerald Schnoor, the co-director of the University of Iowa’s Center for Global and Regional Environmental Research, says state policymakers should use this climate data to make new decisions, like doubling wind energy production and using methane from livestock manure and city sewage treatment plants.

“As global citizens in Iowa, we should be a part of the solution and it’s not all gloom and doom,” Schnoor says. “Rather, there’s some good news to be had in responding to climate change.”

Schnoor also advocates spending more money on bicycle trails and high-speed trains. In addition, Schnoor says the state needs to move away from the use of corn to make ethanol and use other plant materials like switchgrass and corn stalks.

Schnoor, Anderson and Courard-Hauri made their comments during a mid-morning news conference at the statehouse.