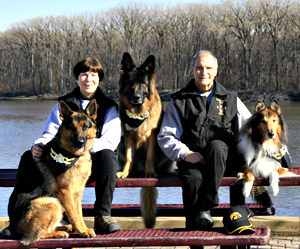 Bill and Lois Hall of Clinton.

A couple from Clinton will be honored as “citizen heroes” on Friday at the Iowa versus Nebraska football game.

The Heroes Game uses the national stage created by this new Big Ten football rivalry to honor the heroic efforts of individuals and organizations in America’s heartland.

Fans of both schools were invited to nominate residents of Iowa and Nebraska who have performed extraordinary acts of heroism and service in their communities.

From among those nominated, staff and volunteers from the American Red Cross selected the winners, who will be recognized during a halftime ceremony on the field in Iowa City’s Kinnick Stadium.

The winners from Iowa are: Lois and Bill Hall of Clinton and the dogs they raise and train provide more than 1,500 hours of service to the community and country in assisting with emergency search and rescue missions and offering therapy visits to local schools and hospitals.

The winner from Nebraska is Jason Parks of Omaha. He was driving to work one morning when he witnessed a collision between two semitrailer trucks. He rushed to the scene of the accident and, with no regard for his own safety, pulled one of the drivers from the flaming wreckage only moments before the truck exploded.