You are here: Home / Business / Fate of Iowa workers unknown as Hostess goes to mediation 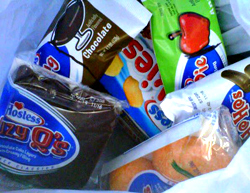 Products made by Hostess.

A bankruptcy judge has ordered Hostess and its second largest union to go into mediation to try to resolve differences that led to a shutdown at plants across the country that make Twinkies and Wonder Bread.

But it’s not clear what that means for Hostess workers in Iowa.

A so-called rapid response team is meeting today at Hawkeye Community College with the 59 bakery and distribution employees and 30 truck drivers affected by the closing of the Hostess plant in Waterloo.

Hawkeye Director for Workforce Development, Jeannie Wright, says the event is designed to give options to those who find themselves unemployed with little or no advance notice.

Wright says the idea is to provide options for those who suddenly find themselves unemployed. She says having options can help make something good out of a bad situation.

Wright says her team has unfortunately had a lot of practice arranging these meetings in the past few months. Beef Products Incorporated in Waterloo closed its doors in May, the investment firm PFG in Cedar Falls filed for bankruptcy in July, and last month Bacon Veneer in Grundy Center ended production of wood products.

The judge overseeing the Hostess bankruptcy proceedings declined Monday to accept the liquidation proposal for the company and asked them to enter into mediation to resolve the strike that led to the company’s decision to shut down operations.It is unknown if they will be able to reach an agreement that will allow the bakeries to reopen.