You are here: Home / Sports / Cyclones fall in tight game with West Virginia 31-24 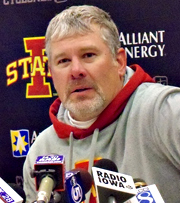 West Virginia’s Tavon Austin took a flip from the quarterback in the backfield and cut outside and went 75-yards for a touchdown to give the Mountaineers the winning31-24 margin over Iowa State Friday at Jack Trice Stadium in Ames.

The play with 6:31 to go in the game came just after the Cyclones hit a field goal to take a 24-23 lead, and coach Paul Rhoads says it was a game changer by a top player.

“He displayed what he is, he’s a great, great football player…he’s special, they’re very fortunate to have him on their team,” Rhoads said.

Iowa State drove down late with a chance to tie the game, but running back Jeff Woody was hit hard and fumbled the ball into the end zone where West Virginia recovered it. Rhoads said it was disappointing to not be able to get a win for the seniors in their final home game.

“Certainly gave ourselves and opportunity to. Turnovers will always get ya, as will giving up big plays to a very, very talented offensive group of football players,” Rhoads said. The Cyclone defense has some trouble stopping the running game of the Mountaineers, giving up 239 yards on the ground.

“They creased us, quite honestly they made us look silly and unprepared — I know we weren’t — but that’s how it came across to me,” Rhoads said. Iowa State got its sixth win last week, making them bowl eligible, which Rhoads says is important.

“It’s outstanding for the seniors and everybody in the football program. And on opportunity to finish up with a winning record is very important to us, and our preparation and the time spent in the next month will certainly reflect that.