You are here: Home / Military / Algona native killed while on duty in Afghanistan 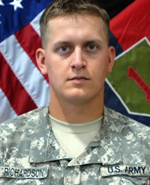 The Department of Defense has announced the death of a soldier who grew up in Kossuth County.

The department says 23-year-old Army Sergeant Joseph Richardson, a native of Algona, died November 16th during a patrol in Afghanistan when his unit was attacked with an Improvised Explosive Device and small arms fire.

A soldier from South Carolina also died in the attack. Richardson was assigned to the First Battalion, 28th Infantry Regiment, 4th Brigade Combat Team of the First Infantry Division based in Fort Riley, Kansas. Richardson had previously served in Iraq with the unit.

He grew up in Algona and attended Algona High School through ninth grade before moving to Arkansas. Richardson is survived by his wife Ashley of Manhatten, Kansas; his mother who lives in Dakota City, Iowa; his father who lives in Gilmore City; two sisters, a brother, two stepsisters and one stepbrother.

The family of Sgt. Joseph Richardson issued the following statement:

“He was eager to come into this world and lived his life full of energy and with passion for everything he did. He loved his family and friends. Joe was always on the move and liked by everyone. There wasn’t a time that you spent with Joe that he wasn’t laughing or joking around. Everywhere you would go you would find someone that knew him or just loved how full of life he was.

“He met his wife Ashley Marie and fell deeply in love. You could see the love between them…it showed in both of their eyes. Joe and Ashley had just celebrated their second wedding anniversary on November 5th. He had planned on coming home and starting his family with her. Joe had just re-enlisted for six more years in the Army. He loved his job; he loved fighting for his country and our freedom.

“Joe loved his brothers in arms and had said he wanted to go to Afghanistan. He wanted to make sure that his brothers, his family, came home safe. Joe was always one to help, no matter what.”

Photo courtesy of the Department of Defense.