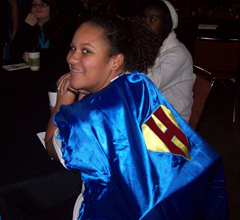 A Davenport Central student wears a “Heros in the Hallway” cape at the governor’s summit on bullying.

Many of the participants in today’s statewide “bullying prevention summit” are high school students.

A small group from Davenport Central High School is wearing blue capes with a big red “H” in the middle. Senior Dylan Carr is one of the “Heroes in the Hallway.”

“We see some bullying going on or anything, we go and try to stop it,” Carr says. “If we can’t stop it, we go and get a teacher involved to help stop it.”

Freshman Katrina Rhodes says she and the other “Heroes” work beyond the hallways of their high school.

“We go around in the cafeterias to, like, make sure everything is going on well and good,” she says.

Hunter Talbott, a student at Southeast Warren, says there’s one kid in his school who gets picked on a lot, and he tries to stand up for him.

“I don’t think it’s fair to bully other kids around,” Talbott says. “…I think our school’s pretty good about not bullying, though. We’re a pretty nice community around here, so we don’t fight too much, but there are certain kids who get picked on more than others.”

There are about a thousand people gathered in Des Moines for today’s summit to talk about ways to prevent bullying. Some of the kids from Murray High School admit they’re here for another reason.

“Got out of school for a day,” one student standing near the beverage kiosk said.

The author who wrote the books that became the basis for the movie “Mean Girls” will speak at the summit’s luncheon.