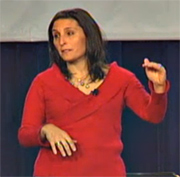 Rosalind Wiseman speaks at the Governor’s summit on preventing bullying.

The author of a book that was the basis for the “Mean Girls” movie told an Iowa audience the nation’s democracy will suffer if the epidemic of bullying isn’t stopped.

Rosalind Wiseman wote “Queen Bees” as a guidebook for parents trying to help their children navigate cliques and gossip from their peers. Wiseman offered this challenge during yesterday’s statewide bullying prevention summit: “Put aside the word ‘bullying.’ It’s about social justice and dignity and our children wanting to feel like they belong and are participating members of our democracy, that they count, that we value them.”

Wiseman urged teachers and administrators in the audience to become the “personification of ethical leadership” in their schools — making it clear what kind of language and behavior is not acceptable.

“These children are our sacred responsibilities,” she said, “not only their brains, but their hearts and their bodies.”

Wiseman, who spoke for about an hour, offered some examples of how to confront bullies — all of it directed to the educators and parents in the room.

Wiseman also cautioned adults not to “bully back” when they confront a kid who’s said or done something objectionable, as she said it’s often the “second hit” that gets noticed rather than the first.

Over a thousand students, parents and educators gathered for yesterday’s statewide bullying prevention summit in Des Moines. Read and hear more about the summit activities here and here.

AUDIO of first half of author Rosalind Wiseman’s speech.

AUDIO of last half of Wiseman’s speech.