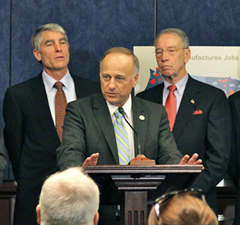 “This incentive for wind energy is working, obviously, by the amount of electricity we generate, the jobs that were created,” Grassley said.

“As much energy as possible — both traditional and renewable — should be produced at home to create jobs and strengthen our national security,” Grassley said.

Back in Iowa, another group gathered at the statehouse to tout the environmental benefits of wind energy. Amelia Schoeneman is with “Environment Iowa.”

“It’s no surprise that wind power is good for our environment,” Schoeneman said. “But for the first time our report quantifies the global warming pollution avoided, as well as other health and environmental benefits.”

“Our message to congress today is clear: Don’t throw off wind power off the fiscal cliff,” Schoeneman said. “Our clean air, water and childrens’ future are too important to blow it now.”

Iowa gets about 20 percent of its electricity from wind turbines and — according to the Environment Iowa report — that means the state’s coal-fired energy plants aren’t releasing 7400 tons of soot into the air each year.