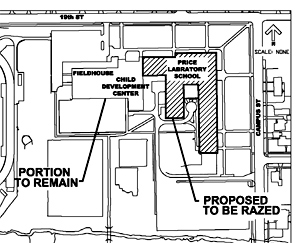 Drawing shows portion of Price Lab School that UNI has asked for permission to tear down.

University of Northern Iowa officials are asking the board that governs the university to approve spending half a million dollars to demolish the majority of the “Price Lab” School on campus.

The Malcolm Price Laboratory School had about 370 preschool through senior high students enrolled last spring, students who were taught by UNI students and their professors.

The school was closed last June, part of a series of budget cuts at the Cedar Falls school. UNI officials cited the $17 million in deferred maintenance for the school when announcing the closure.

The Board of Regents is being asked to approve the demolition of about 70 percent of the school, which sits on the north edge of the campus.

However, the school’s fieldhouse, which includes a gym and track, would be retained, along with a wing of the building that is being renovated to house the university’s Child Development Center.

The Board of Regents voted to close the school this past February. The board is scheduled to vote next Wednesday on the demolition plan.