Governor Branstad held his weekly news conference in the vault of the State Historical Building.

Governor Terry Branstad held his weekly news conference in the basement vault of the State Historical Building where thousands of items from Iowa history are being stored or restored.

The building will mark its 25th anniversary on December 14th with a gala. Branstad oversaw the state committee that recommended the building be built back when he was lieutenant governor in the late 1970s.

“We had a situation where space was so limited that there were hundreds of artifacts stored in a subbasement, and they didn’t have adequate climate control and there were a lot of other problems. We had a major gift that was given to the state,” Branstad says.

Branstad’s committee decided the money should be used for the construction of the historical building. Branstad says the building took on another role when a Des Moines economic development leader came to him and made an offer — and proposal — on where to locate the building.

“The Capitol Planning Commission had chosen the site where the new judicial building is now. He came to me and said ‘you know we have this blighted area between the river and the capitol…we would be willing to raise a million dollars and give it to the state if you would move the location here. We think it could be the catalyst for the revitalization of the east side.'” 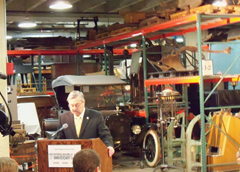 Branstad says the proposal proved to be a good one. “This area is now very much and upscale, vibrant area called the East Village,” Branstad says.

“Actually the President of the United States decided to hold his last rally in the East Village, it tells us we’ve come full circle here. And we’ve come from being a blighted area to be an area of great respect and it is wonderful that we have this kind of facility.”

The state gave $10-million and $10-million was raised privately to go along with the $5-milllion bequest. Iowa Cultural Affairs Director, Mary Cownie says they are planning a gala on December 14th to celebrate the 25th anniversary and raise funds for new exhibits.

“Twenty-five years ago the State Historical Building opened as ‘a symbol of the state’s pride in its past and faith in its future,’ which I think still resonates as it should today,” Cownie says. She says the State Historical Society actually began in 1857  in Iowa City. 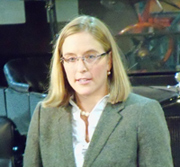 Cownie says the Historical Building has seen thousands of visitors since it opened.

“Over the past 25 years we have provided permanent exhibits, many which you have seen upstairs, but as you walk through the atrium you will see this is a great opportunity. We’re trying to revitalize and refresh our exhibits to provide new and relevant types of history to our constituents,” Cownie says.

She says they have provided tens of thousands of engaging experiences to students and adults. Cownie says they have already surpassed their goal of raising $100,000 from the gala.

She says that money will take the Historical Building into a new era in its next 25 years.”We’re going to be announcing and further developing plans to revamp our museum exhibits and correlating programming. Identify and implement new methods of collecting and documenting Iowa history as it is happening. Reintroduce cultural, arts and history into the intersection where education and hands-on experiences can meet with entertainment and further engaging our constituents,” Cownie says.

Tickets for the gala are $100 each or $75 for “young professionals” under age 35. The gala is from seven until 11 p.m. on December 14th. Contact the State Historical Society for tickets.