A key legislative leader says he’s intrigued by a proposal that would ensure college tuition rates at Iowa, Iowa State and UNI remain the same.

The board that governs the three state-supported universities voted Wednesday to freeze tuition rates for in-state students for the next school year — if legislators provide a 2.6% increase in state taxdollar support of the university budgets.

House Speaker Kraig Paulsen, a Republican from Hiawatha, says it’s a “very thoughtful” proposal. “We’re going to give that its due consideration,” Paulsen says. “I really appreciate them actually putting that on the table.”

Another key legislator — Senate Democratic Leader Mike Gronstal of Council Bluffs — says he anticipates the three universities will get a boost in state support. Gronstal predicts community colleges will get a state funding boost, too.

“This is about building our economy and if there’s anything that we’ve all heard for the last years is that there’s a skill shortage in the state of Iowa,” Gronstal says. “We have people that would like to work, but they don’t have the skills for the jobs that are out there.” 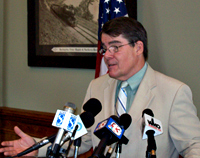 Community college programs can meet that need, according to Gronstal. The Board of Regents is asking legislators to set aside an additional four-million dollar appropriation for the University of Northern Iowa.

In the past year to deal with budget shortfalls, the president of the Cedar Falls institution eliminated a few dozen degree programs and closed an on-campus K-through-12 school that had been a sort of teaching laboratory for professors and students.

That means lawmakers would forward an additional 16 million dollars to the University of Iowa, Iowa State and UNI in the next state budgeting year to meet the Board of Regents plan to freeze tuition rates for students who are Iowa residents.