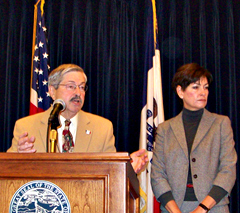 Iowa Governor Terry Branstad will not put reinstatement of the death penalty on his “to do” list for legislators.

“I like to focus on things I think have a realistic chance of being approved and I think considering the present make-up of the senate…that we need to focus on things that I can accomplish in the next couple of years,” Branstad says.

Branstad, a Republican, made the issue a central focus of his 1994 campaign, calling for a limited death penalty for those convicted of two “Class A” felonies, like kidnapping and then the murder of the victim.

“In that particular year we had a little girl from Grinnell who was kidnapped, raped and murdered,” Branstad says.

Nine-year-old Anna Marie Emry was murdered in mid-August of 1994, less than three months before the election. But despite Branstad’s victory over a Democrat who opposed the death penalty and Republican majorities in both the House and Senate during Branstad’s fourth term, a bill reinstating capital punishment in Iowa never reached his desk, not even the very limited death penalty bill Branstad supports.

“My position is well-known and my position has been consistent throughout the last 20 or 25 years,” Branstad says. “And my position is consistent with my philosophy of protecting innocent human life and trying to prevent dangerous criminals from committing further murders.”

Branstad has long argued his limited death penalty would be a deterrent to those who commit violent crimes and kill the victim in hopes of covering up the crime.

A Republican state senator recently told the Associated Press he would propose a bill in 2013 that would reinstate capital punishment in Iowa. The Republican governor sees no path forward for that bill, given what Branstad describes as the “adamant” opposition from the Democratic leader who controls the senate’s debate agenda. Branstad made his comments this morning, during his weekly news conference.