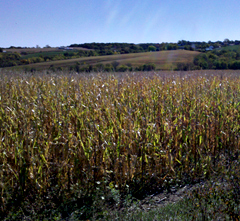 A cornfield near Norwalk.

The annual survey from Iowa State University shows farmland values increased almost 24-percent over last year to a new record high of an average cost of $8,296 dollars an acre.

I.S.U. economist, Mike Duffy compiles the numbers for the survey. “Basically what we found was higher-quality ground moving at a pretty good level, and lower quality ground not increasing so much,” Duffy says.

Duffy says record corn and bean prices are part of the reason for the increase. “The commodity prices were a primary driver, another driver was the very low interest rates that we have. People also said lack of alternative investments was another reason,” according to Duffy.

O’Brien County had an estimated $12,862 dollar average value, the highest average county value. O’Brien County also had the highest percentage increase and highest dollar increase in value, 35.2% and $3,348, respectively. The 23.7% increase marks the third straight year the land values have increased by 15-percent or more.

Duffy doesn’t agree with those who say the high price bubble of ag land is going to eventually burst. “I don’t think that it’s going to be a bubble pop. I think it would either be be more akin to a tire getting a nail in it, where we’ll gradually adjust down. Or it may even be that we don’t adjust down much, but the rate of increase will either slow or slightly go down,” Duffy says.

He does think the double-digit increases in land prices may not last much longer. “I don’t see any way that we can maintain the rate that we’ve had,” Duffy explains. “The last three years we’ve increased almost 64-percent, and that’s just not sustainable.”

He says the supply and amount of corn and soybeans that are grown will make an impact on the land prices moving ahead. “The world is already responding by planting more, so we’re going to see adjustments,” Duffy says.

“Now all that said though, the drought that we’re experiencing right now is very serious. And what it portends for next year is kind of anybody’s guess right now. But if we don’t get rain, we’re not going to have a crop. So it doesn’t matter how high prices are.” This is the highest state land value recorded by the survey and the first time county averages have reached levels over 10-thousand dollars an acre.

You can find out more about the land values survey here: www.extension.iastate.edu