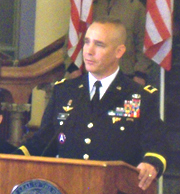 The leader of the Iowa National Guard says fewer Iowa soldiers and airmen are being deployed overseas at this time, and that trend should continue for at least the next two years.

Major General Timothy Orr updated Governor Branstad and his advisors on the status of the guard at a budget hearing at the statehouse.

General Orr said some 218 guard members are currently deployed, most of them in the Middle East.

“This is the lowest since the beginning of the war. We don’t see it getting much higher than that. This is a trend nationally tied to the president’s strategy to come out of Afghanistan and coming out of Iraq,” Orr said.

He expects a slight bump up in the number of soldiers deployed to over 300 next year to support the U.S. withdrawal from Afghanistan.

“As you look at that chart, you will see there engineers, transportation, aviation and what you’re seeing is really a movement piece,” Orr explained.

“It’s typical of what we saw in Iraq in downsizing as we move people and equipment out of Afghanistan. General Orr is asking for a minimal increase in state funding next year, including money to fully fund tuition assistance for returning soldiers.

He also wants to hire a deputy adjutant general, a position that’s been left unfilled during tight budget times.