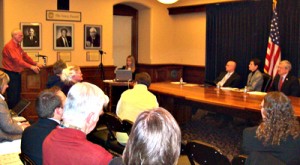 Governor Branstad listens to a speaker during a public hearing on the budget.

The state is projected to collect more than $6.5 billion in taxes next year and 20 Iowans went into the governor’s office late this afternoon to offer their advice for how to spend it.

Cherie Mortice, a retired Des Moines school teacher, was one of six members of Iowa Citizens for Community Improvement who spoke during the hour-long public hearing.

“Governor, I’m disappointed that you limited the number of people being allowed to come in here. This room is practically empty. It certainly has more capacity,” she said.

“Your attempts to limit the power of public dissent simply emboldens us.”

Other members of the group staged a protest outside the governor’s office, periodically chanting: “Let us in!”

“It’s something that’s very, very positive and viable for small business to maybe have some sort of I want to say redress to sometimes oppressive taxes,” Greenspon said.

Representatives of a few Iowa business groups also spoke, praising Branstad for his stewardship of the state budget. Four of the speakers made specific spending requests, asking Branstad to provide more money to the Department for the Blind, to epilepsy prevention programs and for college loans to future Iowa physicians. Natasha Rets of the Brian Injury Alliance of Iowa asked the governor to provide at least $410,000 for the state’s brain injury services program.

“Treatment and services for Iowans with brain injuries are grossly unfunded and uncoordinated,” Rets said, “and that is leading our Iowans to become either poverty-striken, homeless, losing their jobs or incarcerated at an alarming rate.”

Branstad plans to present a state budget outline to legislators on January 15.