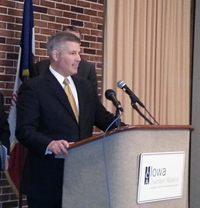 Chris McGowan, president and CEO of Siouxland Chamber of Commerce.

Leaders of a group representing business interests in the state are calling for a host of tax reforms and say they would support a hike in Iowa’s gas tax.

“The trick is, not only mustering the political support for the fuel tax to generate that additional revenue, but we have to address the distribution formula.” The Iowa Chamber Alliance represents chambers and economic development organizations in Iowa’s 16 largest cities.

ICA chair and Greater Cedar Valley Alliance CEO Steve Dust said funds raised from a gas tax increase should be directed in way so Iowa’s most traveled roads are given top priority.

“That recognizes our commercial centers where people shop, where employment is located and we see the wear and tear on our roads,” Dust said. “Certainly we want to take care of all of our farm to town roads as well, but we have to have the funds available to make real progress on improving the condition of our commercial center streets and roads.”

The state’s gas tax has remained unchanged since 1989. Another top priority for the ICA is commercial and property tax relief. Chris McGowan, president and CEO of the Siouxland Chamber of Commerce, noted Iowa ranks 42nd among the states in a “business tax climate index” compiled by the nonpartisan Tax Foundation.

“While these rankings are not definitive, they do impact the selection process for companies evaluating where to invest, including businesses that are currently operating in Iowa,” McGowan said. “These put us at a severe competitive disadvantage during the critical early stages of their decision making process.”

Iowa lawmakers have not enacted significant commercial and property tax reform in over three decades, according to Stineman, the ICA executive director. But, he’s hopeful that’ll change next year.

“We do maintain optimism that we’re going to be able to find some common ground,” Stineman said. “The good news is, over the last two legislative sessions, we’ve had considerable discussion, considerable debate and we’ve fleshed out a lot of different proposals. There is not a whole lot of distance that has to be traveled in order for one of these to strike a real compromise.”

You can learn more about the ICA’s legislative agenda at www.iowachamberalliance.com.