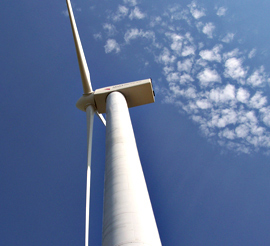 The federal tax credit that makes wind energy more financially attractive is due to expire at month’s end, and now several governors from Western states are urging Congress to act.

Harold Prior, executive director of the Iowa Wind Energy Association, says he’s encouraged by the governors’ move and is hopeful lawmakers will approve the measure, or else the wind industry may face more shutdowns and cutbacks.

“Governors and organizations of governors that are bipartisan speak pretty loudly to Congress in Washington,” Prior says.

“Hopefully, they can have enough influence to get an extension included in this ‘fiscal cliff’ bargain.”

Prior says, “We’re very close to losing our capacity to meet orders within the next 12 months or so because many of the major component assembly plants are being shut down or at least reduced.” The Western governors say the Production Tax Credit, or PTC, is vital to the near term future of renewable energy production, but it should not be permanent.

Prior says in a few years, with all the technological advancements, the PTC will not even be needed. The governors says the credit is critical now for achieving the country’s clean energy goals, building the nation’s manufacturing base, creating jobs, lowering energy costs and strengthening domestic energy security.