You are here: Home / Fires/Accidents/Disasters / Bridges in western Iowa to be named for fallen law officer 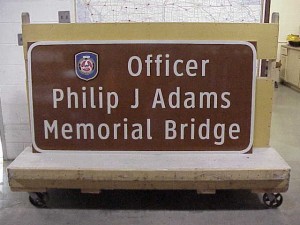 A ceremony is scheduled for Monday in western Iowa to dedicate another bridge in honor of a law officer who was killed in the line of duty. Philip Adams was 45 years old when he died while working for the Iowa State Highway Commission – now known of the Iowa Department of Transportation.

David Lorenzen is Chief of Motor Vehicle Enforcement for the Iowa DOT. “(Adams) was working on Highway 30, just west of Missouri Valley, checking some commercial vehicles when he was struck on the side of the road by a passing motorist,” Lorenzen said. Adams, who died on March 31, 1973, began his law enforcement career with the Missouri Valley Police Department in 1958.

The Interstate 29 bridges that overpass U.S. Highway 30 in Missouri Valley are being named in Adams’ honor. Some of his family will attend the dedication ceremony.

Nearly a dozen bridges across Iowa have been dedicated this year in memory of law officers who have died in the line of duty. “All of these officers, whatever the circumstance may’ve been, lost their lives in service to the State of Iowa,” Lorenzen said. “We would hope as people see (the bridge signs) they will recognize the dedication and service these officers and their families have provided and the sacrifice that’s been given.”

The dedication ceremony for the Officer Philip J. Adams Memorial Bridge will be held Monday at 1 p.m. at the Rand Community Center in Missouri Valley.