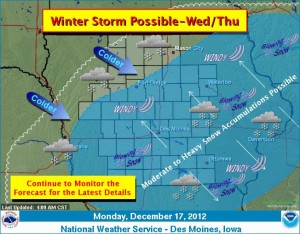 Iowa’s first major snow storm of the season is expected this week, but National Weather Service Meteorologist Kevin Skow says it’s unclear how much of the state will be impacted. “It’s fairly certain the storm will happen, but the biggest question right now is where the heaviest snow will fall,” Skow says.

The current forecasts calls for snow, possibly mixed with rain, to arrive in western Iowa Wednesday afternoon. The snow will move across the state through the overnight hours and into Thursday morning. “Some of the models are showing accumulations well in excess of Winter Storm Warning criteria, which is six inches. Some areas could see well over six inches of snow with this storm,” Skow says.

The snow will be accompanied by colder air and gusty winds. “There will probably be some strong winds on the back side of this which could lead to some blowing snow,” Skow says. High temperatures on Thursday and Friday are expected in the 20s.

Iowans experienced one of the mildest winters in the state’s history last year as there was very little snowfall and temperatures were well above normal. Prior to last winter, Iowans endured four consecutive winters with snowier-than-normal and colder-than-normal conditions.