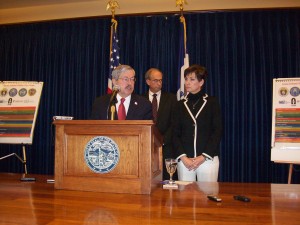 “While it’s difficult to understand such an evil act, we do know that our children and grandchildren remain precious gifts and we need to do all we can to protect them,” Branstad says.

This past weekend some members of congress have been calling for teachers and administrators to have a gun handy in school and be trained in how to use it. Branstad says he wants to look at all options, but that’s not something he’s embracing, as Branstad says “some” teachers “would not be comfortable” with a gun.

Branstad’s daughter, Allison, is a teacher. Lieutenant Governor Kim Reynold’s daughter, Jessica, is a teacher, too, and while Jessica’s school has a safety plan if there’s an intruder in the school building, Reynolds says teachers and students have never practiced it.

Iowa Homeland Security and Emergency Management Division Administrator Mark Schouten says the “School Safety Guide” his agency distributed earlier this year has recommendations for how schools should respond to an intruder with a gun.

“It also contains a self-assessment tool so schools can grade their own safety plans,” Schouten says.

“Active shooter training demonstrates a change in how law enforcement has dealt with these dangerous events since the killings at Columbine High School in 1999. Before those killings, law enforcement practice was to isolate and negotiate with the shooter. After Columbine, officers have been trained to pursue the shooter as fast and with as much force as they can,” Schouten says. “Officers are instructed to go forward towards the noise and make it stop.”

Schouten says the “primary mission” for teachers is “to teach” and arming teachers is a “difficult question” for policymakers to wrestle with.

Find an electronic copy of the School Safety Guide here.

AUDIO of Branstad’s weekly news conference, at which comments above were made.