You are here: Home / Education / Band from NW Iowa gets rare honor to march in Rose Parade 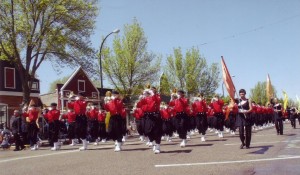 The Pride of the Dutchmen Band

Members of a high school marching band from northwest Iowa leave soon for a weeklong trip to California where they’ll play before a global TV audience of a billion people.

Steve Connell, band director at MOC-Floyd Valley Senior High in Orange City, says it’s a huge honor to be picked to march in the Tournament of Roses Parade in Pasadena.

“It is the toughest invitation to get for any band,” Connell says. “We’ve been working very hard for this. They invite 13 bands from around the world every year so we’re the only Iowa band. There’s only been two other Iowa (high school) bands that’ve ever been invited, Pella and Valley. This is our second trip out there. It’s a very tough ticket.”

The Pride of the Dutchmen Band also played in the Rose Parade in 1993, with Connell leading them, as he’s been the school’s band director 38 years.

Connell says he’s thrilled to be returning to southern California with a new crop of kids who’ll be putting their many talents on display.

“There’s a lot of things that make us unique,” Connell says. “We march in Dutch costumes and wooden shoes, which is always appealing to crowds. We carry our Dutch tradition on from up here in northwest Iowa. We are a very small school with a big band. We have 420 kids in the high school and 170 in the band. That’s fairly impressive in itself.”

The parade course is about six-and-a-half miles. That’s a long way in wooden shoes, but Connell says they’re ready for it.

“It’s a good two-and-a-half hour march solid, you don’t stop,” Connell says. “We march down Colorado Boulevard, there are an estimated 700,000 people on the street and it’s broadcast worldwide to 230 markets and they estimate a billion people will be watching the parade.”

They’ll be playing two songs for the entire event, one then the other: “Championship” and “The Battle Hymn of the Republic.”

To take the trip, the band raised about $300,000 over the past four years through fundraisers like selling pizzas and collecting recyclable cans.

The band leaves for California on December 27th. The 124th annual Tournament of Roses Parade will be on January 1st.