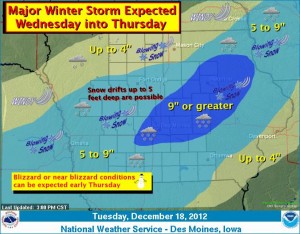 The National Weather Service has upgraded the Winter Storm Watch for much of Iowa to a Winter Storm Warning. Meteorologist Jeff Johnson says it may be the biggest single snow storm to hit the state since December 2009.

The snow is expected to arrive in western Iowa Wednesday afternoon, with heavy snow falling across Iowa by the evening hours. “As the event unfolds and we get into Thursday morning, the winds will pick up out of the north. On Thursday morning, around sunrise, we should have sustained winds of 30 miles per hour with gusts into the lower 40s along with some continuing falling snow,” Johnson says. “That will cause near-blizzard conditions, especially in the open areas.”

If there are stronger winds, Johnson says a Blizzard Warning could be issued. A small section of northwest Iowa could miss out on the storm, while north-central Iowa may only receive a few inches of snow. But, the high winds could still cause problems.

The snow is expected to exit the state, along with the strong winds, sometime Thursday afternoon. Snow accumulations of 6 to 10 inches or higher are possible through southwest, central and northeast Iowa.

Cold conditions will accompany the storm with highs in the 20s Thursday and Friday and low temperatures Friday morning in the single digits and teens.