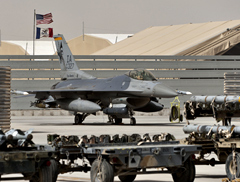 And Iowa F16 being flown by the Iowa National Guard during a mission in Afghanistan.

At least three Iowa congressman will vote against a bill that would close the F16 fighter jet unit in Des Moines.

The Pentagon estimates 32 people will lose their jobs at the Iowa Air Guard base in Des Moines. Congressman Tom Latham, a Republican from Clive, says the part-time guard unit’s more efficient than the full-time military.

“We’re going to need these planes. It’s just a matter if they’re in active duty or in guard facilities,” Latham says.

“The problem is this one unit, basically, for F16s is being singled out and theyvre got, you know, the highest record, the best record of any unit in the entire country.”

Iowa’s congressional delegation had worked together to insert language in previous bills that would have kept the unit operating. The closure is now included in a massive defense spending bill that is expected to pass the U.S. House of Representatives on Thursday.

“It’s very, very frustrating,” Latham says. “This is not the decision, certainly, that we had worked for and hoped for, for so long.”

The 21 F16 jets based out of Des Moines were slated for retirement within eight years. The Pentagon plans to have the Des Moines unit control and fly unmanned drones overseas. Latham isn’t sure the current staff who’re there will retrain for drone duty, or be moved to other bases.

“It’s going to be an entirely different mission,” Latham says. “Whether those people, the same people will be able to transfer over to a new mission — it’s going to be very, very difficult and we want to make sure that if, in fact, that is the case there’s give adequate training and the ability for those folks to continue to serve.”

Congressman Dave Loebsack, a Democrat from Iowa City, says the Pentagon has not justified the closure and he will vote against the entire defense spending bill in protest. Congressman Bruce Braley, a Democrat from Waterloo, says he is “likely” to vote no.

“Not only because of the very disturbing decision about eliminating those 21 Iowa National Guard fighter jets at the 132nd fighter wing in Des Moines, but also because of a number of other very important provisions,” Braley says, “including an additional $90 billion for funding of the war in Afghanistan.”

Braley says the bill should have spelled out in more detail the “true cost” of the war in Afghanistan. Braley, though, says the bill does include some important moves, like boosting the base pay for rank-and-file soldiers.

“But this decision that was made about the 132nd Fighter Wing is something every member of the Iowa delegation fought strongly against,” Braley says. “It does not make sense and yet it is a part of the defense authorization bill and one of the reasons I will probably vote against it.”

Congressmen Leonard Boswell of Des Moines and Steve King of Kiron have not publicly indicated how they intend to vote.