You are here: Home / News / Bitter cold will be the next enemy, as temps will drop tonight 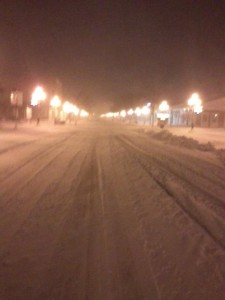 The snow is starting to taper off in parts of western and central Iowa, while the east end of the state is getting belted.

Forecasters say the flying flakes will stop falling by midday, but the howling winds will keep blasting.

Meteorologist Frank Boksa, at the National Weather Service, says it’ll be getting dangerously frigid later this afternoon and evening.

“Tonight, we’re going to see temperatures fall off into the single digits so with the winds, the wind chills will be rather cold,” Boksa says. “Then, with the fresh snowfall, temperatures will be chilly through the weekend with highs mainly in the 20s.” Wind chill factors tonight may be 10-to-20-below zero.

When this blizzard is past, Boksa says conditions should improve for the next few days. Still, there’s the possibility of more snow early next week, on Christmas Eve or Christmas Day.

“Our medium-range forecast models are all over the place with what they think is going to happen,” Boksa says. “In order to avoid confusion with flip-flopping back and forth, I’m just keeping the same chances going through the Tuesday-Wednesday time frame.”

The chance of more snow in central Iowa on the holiday is about 30%. Check for your forecast at www.weather.gov