You are here: Home / News / Blizzard blankets Iowa in white, more than 13″ of snow on the ground 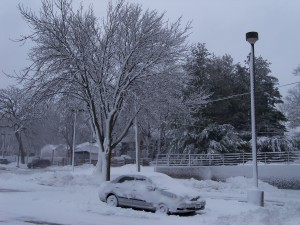 Heavy snow’s already on the ground from the first major snowstorm of the season.

Several counties in central Iowa report more than a foot of snow while a cluster of counties in northeast Iowa have nearly 11 inches. National Weather Service meteorologist Kevin Skow says the blizzard is beginning to ease.

“At this point, the storm is starting to pull slowly away from the state but we still have widespread snow across most of Iowa,” Skow says. “That should slowly taper off during the mid-to-late morning hours from west to east.”

While the snow is starting to lessen in western and central Iowa, Skow says another threat will remain through this afternoon.

“The big story today will be the winds,” he says. “We’re expecting strong winds, 30-40 miles per hour or even 50 to 60 mph wind gusts which will blow that snow around and create hazardous travel conditions.”

If you think you heard thunder last night — you did, and there was lightning, too. That’s “thundersnow,” according to Skow.

Snowfall totals show three deep areas in the state — near Council Bluffs, around Des Moines, and between Dubuque and Waterloo. The deepest report is 13-point-1 inches, just north of Des Moines.