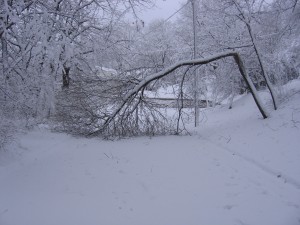 Areas of northeast Iowa are also reporting high snowfall totals with 10 inches in Waterloo and up to 11 inches in Dubuque. Meanwhile, many areas of far northwest and southeast Iowa received just 1 to 3 inches snow.

Hillaker says this blizzard may be the biggest winter storm to hit Iowa since December 8-9, 2009 — although that event was more widespread. “A larger area of heavy snow occurred with that December 2009 storm,” Hillaker said. “We had a statewide average of 10.3 inches of snowfall. This current storm will probably end up being around 6 to 6.5 inches for a statewide average.”

This storm, like the one in 2009, included high winds that helped knocked out power to tens-of-thousands of Iowans. The National Weather Service reported winds of 40 to 50 miles per hour across much of the state Thursday, with a 60 mile per hour wind gust recorded in Ottumwa.

This blizzard could also be compared to a massive winter storm that blanketed Iowa in early January 1996 when nearly 14 inches of snow fell in Des Moines. Hillaker notes there was already a lot of snow on the ground when that storm hit. “And it was a much colder storm. Temperatures were in the teens when the snow started, so it was a very dry, fluffy snow that drifted very badly compared with this current event as temperatures were near freezing and the snow was a bit stickier,” Hillaker said.

The snow that’s on the ground across Iowa won’t be melting anytime soon as high temperatures are expected in the teens to low 30s over the next several days. The next chance for snow arrives early next week, including Christmas Day.