You are here: Home / Fires/Accidents/Disasters / Getting cars out of the ditch after a storm not always easy

There are still several cars and trucks still stuck in the ditches along the interstate highways following the blizzard last week. Iowa DOT maintenance engineer, Bob Younie, says his department works with the Iowa State Patrol to help get those vehicles pulled out.

“When folks drive off the road and they need a wrecker to get their car out — and semis too for that matter — we understand the impatience of getting the vehicle back out and getting it fix or repaired or on the way, whatever has to be done,” Younie says. “But we also have to balance the safety concerns of the traffic backups that are associated with the towing vehicles pulling especially those big trucks out.” 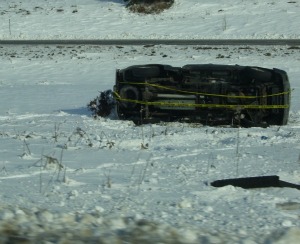 Car overturned in the ditch along I-35.

Today is a big travel day after the holiday and that makes it tough to do work on the highways.

“There’s a lot of folks on the road maybe coming back from Christmas, so it’s a little harder to get a closure in place today that doesn’t have large backups than it will be later in time. So, it’s a balance of public mobility and public safety,” Younie says.

He says traffic can back up for miles as the wreckers have to close off traffic to pull the bigger trucks out of the ditch.

An 80-mile stretch of Interstate-35 was closed to traffic Thursday during the height of the storm as Younie says they tried to prevent more accidents and people sliding into the ditch.

He says I-35 has a set of gates near Ames for northbound traffic and just north of Highway 18 near Clear Lake and Mason City for soutbound traffic that they used to close the road after several collisions. “And the system really works well from out standpoint to be able to effectively close off the interstate. And this again was a public safety issue. It wasn’t safe for people to drive out there,” Younie says.

Younie says the state patrol monitors the situation determines when it is and isn’t safe to tow vehicles during severe weather.