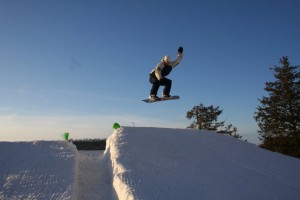 Operators of winter recreation areas in Iowa are reaping the benefits of last week’s blizzard.

Thousands of Iowans are spending the holiday break skiing, snowboarding and tubing at places like Sundown Mountain in Dubuque.

Stephanie Grutz is marketing director at Sundown and says very few outdoor enthusiasts paid a visit to the resort prior to last week’s storm.

“We opened up a couple weeks before (the storm) and then it got warm, so we shut down. This new snow from Mother Nature really helped us put down a base and open 100-percent,” Grutz says.

Grutz notes last winter actually provided excellent conditions for visiting Iowa’s outdoor rec areas because they produced artificial snow and it wasn’t very cold. “But, when people don’t see real snow in their backyard, it’s hard to get them to see all of the snow we have,” Grutz says.

Joel Bryan, general manager of Seven Oaks Recreation in Boone, says last year was tough on his bottom line – even though Seven Oaks made more snow and stayed open more days than ever before. “But, we just didn’t see the attendance. We understand…when you have (temperatures in the) 50s, 60s and 70s, people just aren’t thinking about playing in the snow,” Bryan said. “You really need that snow from the sky to be in people’s backyards. That’s what gets them in the mood to come out.”

The Boone area received around 8-inches of snow last week. Bryan said it arrived just in time. “It couldn’t have been more perfect,” Bryan said. “It kind of set the stage for people to get in the mood and it was right there for Christmas, so you didn’t get a lot of complaining from people about all of the snow. The attendance so far has just proven that the snow from the sky is more (valuable) than any marketing dollars you could spend.”