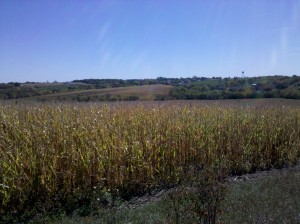 A recent report from Iowa State University found the average price for an acre of Iowa farmland hit a new record high in 2012.

“It’s that they need to find access to land to be able to farm,” Stark says. “It’s so competitive out there right now, with people buying land and with successful producers that are bidding up the price of rented land, it’s very challenging for young producers just to get the base of operation through land to get their operations started.”

Stark says with advances in technology, farmers today have a bit more down time for family and other activities, something relatively new in the world of agriculture. That’s making it more appealing for young people to pick farming as a career path.

“I think we’re seeing more young people wanting to come back to farming now than we’ve seen in a long, long time,” Stark says. “They know they can come back to the farm and not only have it be a way of life, but that they can they can have a life.”

The challenge of finding land to farm remains, it part due to record corn and bean prices as well as low interest rates.