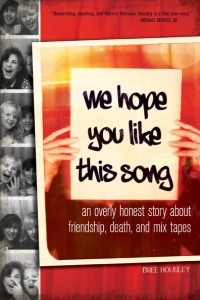 A set of New Year’s resolutions, developed as a tribute to a fallen best friend, is now the subject of a book from an eastern Iowa native. The book is titled We Hope You Like This Song: An Overly Honest Story about Friendship, Death, and Mix Tapes.

Author Bree Housley grew up in Walcott, Iowa, but now lives in Chicago. She says the book evolved from a blog about an effort to complete 52 resolutions, one for each week of the year. The idea was to honor the memory of Housley’s best friend since fourth grade, Shelly Warner, who died tragically at the age of 25. Bree says she and her older sister, Courtnee, spent a year doing crazy things the out-going Shelly would have done.

The challenges were difficult for the normally reserved sisters, but they proved rewarding. “Once you open yourself up to other people, life is just more fun and it’s richer,” Housley says. “All of the people who surround you…they just make your life better and you can take them for granted. It was a nice learning experience to just be a little more social and change up life a little bit.”

Shelly Warner passed away in January 2005 from complications caused by Preeclampsia shortly after giving birth to a daughter. Warner was a school teacher in Iowa Falls.

Housley says it took her nearly four years to truly face her friend’s death, but writing a book about Shelly was always on her mind. “I knew I wanted to write about our friendship at some point, but it just seemed really sad and I needed some sort of happy ending and I didn’t have it,” Housley says. “I didn’t want to write ‘Beaches,’ which I kind of joke about in the book.”

Housley writes about coming to terms with her best friend’s passing as she and her sister live life as the Shelly would have — to the fullest. The resolutions ranged from giving Valentines to strangers, singing at a karaoke bar, and letting their boyfriends (now husbands) pick their outfits for a week. For each resolution or challenge Bree and her sister failed to complete, they donated $15 to the Preeclampsia Foundation.

Housley says she’s thrilled to hear from readers who say they’re getting back in touch with old friends. “I don’t know if I set out for that to be my biggest goal, but I’ve heard from people who say ‘I got halfway through (the book) and called everybody I grew up with.’ I could not ask for a better success story than that,” Housley says. “It’s really nice that I’ve somehow helped people reach out to people from their past.”