You are here: Home / Education / Start the new year off with close-up view of a bald eagle 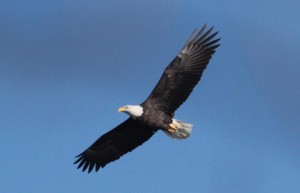 Photo by Karl Schilling at Easter Lake in Des Moines

As the rivers freeze, bald eagles migrate south to seek out open water and a tasty meal of fresh fish.

While scare in Iowa during the summertime, the white-headed majestic birds are becoming much more plentiful now that winter’s arrived.

Mike McKean is a park ranger with the U.S. Army Corps of Engineers on Arsenal Island between Davenport and Rock Island. McKean is one of many hosts who are welcoming visitors to eagle-watching events along the Mississippi River. 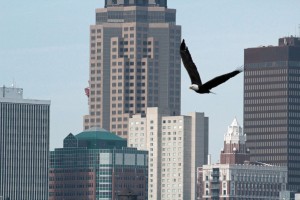 “Scopes will be set up, staff is available, not only rangers from the Corps of Engineers but other agencies involved,” McKean says. “We have a nice area where you can go view the eagles, ask questions and hopefully, have a good time.”

Eagle-watchers will want to dress warmly and bring their own set of binoculars, a telescope and a camera with a zoom lens. McKean says he’s hoping to see larger numbers of eagles this season, at least compared to a year ago.

“Since it was kind of a mild winter, eagle counts were generally a little bit lower than in years past,” McKean says. “Depending on where you are, you can certainly see 12 or more. It’s not unheard of to see 30 to 50 depending on where on the river you are, what’s around you and what the weather is doing.”

While it’s rewarding to get a glimpse of our nation’s symbol in flight, eagle-watching events are also excellent for watching people.

“It’s pretty entertaining to watch,” McKean says, “especially the younger kids who’ve never seen an eagle before and aren’t really sure what one looks like. If it’s flying or even if it’s just perching, I think they’re really struck simply by the size. Even far away, they’re pretty good-sized birds. It’s always a joy to see the kids get a kick out of seeing them, for the first time especially.”

Communities, parks and nature preserves all across the region are hosting eagle-viewing events this winter, wherever there’s open water.