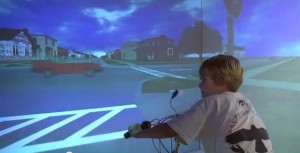 You may’ve heard there’s a high-tech automobile simulator at the University of Iowa, but the campus is also home to a bicycle simulator.

Dr. Jodie Plumert is co-director of the sophisticated virtual environment which is used to study how children make decisions in heavy traffic without being at risk.

Plumert says the simulator immerses bicycle riders in a city-scape.

“There’s a bicycle that sits in the middle of these three very large screens that are placed at right angles to each other so it completely wraps around the person who’s riding the bike,” Plumert says. “As you pedal the bike, you actually appear to be moving through the environment. As you turn, you appear to be turning and so on.”

She says one focus of the bicycling simulator is to compare how kids and adults cross intersections filled with virtual on-coming cars and trucks.

From the recent research, Plumert says they’re seeing a pattern in the children bicyclists, ages 10, 12 and 14. She says they choose the same gaps in traffic as the adults to cross, but they tend to hesitate before pulling out.

“What happens is that they end up with less time to spare than the adults have,” Plumert says. “One thing we’ve been able to pinpoint is that kids, even at these older ages, when you put them in a fairly challenging traffic situation, are not coordinating their movements with the traffic as well as the adults are.”

There are some 600,000 bicycle-related injuries treated in emergency rooms nationwide each year. Children ages five to 15 years old represent a particularly vulnerable segment of the cycling population.

Motor vehicles are involved in about one-third of all bicycle-related brain injuries and in 90% of all fatalities resulting from bicycle crashes.