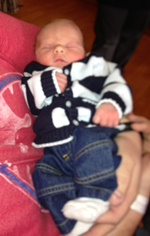 Ryder Frink was the first new baby born in 2013.

The first baby born in Iowa in 2013 arrived just 13 minutes into the new year.

Ashley and Patrick Frink of Pleasant Hill are the parents of Ryder Allen Frink, who was due January 6, but arrived at 12:13 a.m. Tuesday. Patrick says his wife spent 10 hours in labor before their son was delivered at Iowa Methodist Medical Center in Des Moines.

“I don’t know if it’s really sunk in yet how astounding it is that our son was the first (baby) born in Iowa in 2013,” Patrick said. “We’re just happy that he’s out and he’s healthy and there were no major complications with the delivery or birthing process.”

Patrick and Ashley Frink are both 28-years-old. They also have a daughter, Calleah, who will turn 8 on February 1. Patrick, a native of Marshalltown, is a welder with John Deere Des Moines Works in Ankeny.

Ashley is a human resources representative with Crown Lift Trucks in Des Moines. The couple disagreed on several potential names for their new son.

“And then, Ryder came around and it was pretty much the first (name) we were both like, ‘yeah, we like that.’ That’s how we got Ryder,” Patrick said. “Allen is my middle name and my wife’s grandfather, who passed away a few years back, it happens to be his middle name as well.”

Ryder Allen, who weighed 6-pounds, 12-ounces at birth, is expected to go home with his parents Thursday morning or afternoon. There were several other Iowa babies born early on New Year’s Day. A Bettendorf hospital reported a girl was delivered at 12:17 a.m.