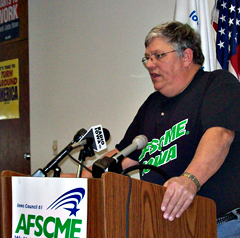 The president of the union that represents the largest share of state employees says Republican Governor Terry Branstad has “demonized” state workers by suggesting their health care benefits are too generous.

AFSCME Council 61 president Danny Homan spoke during a news conference this afternoon, on the eve of contract talks with the Branstad administration.

“It’s just unfair for him to continue to go after state workers, you know, with his attacks of trying to take something away from them,” Homan said. “It’s just not fair — while he’s handing out goodies to his management people.”

“You take Debi Durham for example. She got a $30,000 bonus day one on the job,” Homan said. “At least the previous governors waited ti’ they had done something for the state before they got a bonus. She got one walking in the door. The other individuals all got these bonuses when they were hired.”

Tomorrow Homan and other representatives of the American Federation of State, County and Municipal Employees union will start bargaining with a lawyer Branstad hired to handle his side of the haggling over a two-year contract. Since state workers began collective bargaining in 1977, contract talks have gone to arbitration just twice — once during former Governor Robert Ray’s tenure in the early 1980s and in 1991 when Terry Branstad was in his previous, four-term run as the state’s chief executive.

“We ended up having to take him to court and to the Supreme Court because he refused to honor the final and binding award of the arbitrator,” Homan said. “…I think this is a vendetta — and that may be too strong a word — but I think…this governor doesn’t like this organization and, conversely, I don’t believe he respects the work that state employees do.”

A spokesman for the governor accused Homan of being a “union boss” who is “desperately trying to prevent his members from paying their fair share.”

Tim Albrecht, the governor’s communications director, said in a written statement: “The governor is proud of our state employees, and they are well-compensated as a result of their great work. Iowa taxpayers should expect that everyone working for them should pay their fair share when it comes to expensive employee benefits.”

Branstad has said in the past he is seeking “fair” concessions from state employees, to better align public sector wages with pay and benefits in the private sector.

The bargaining sessions over state employee contracts are scheduled for every Saturday and Sunday in January. If a deal can’t be cut, an arbitrator will be called in the week of February 11. March 1 is the deadline for the arbitrator to rule on what wages and benefits state workers should receive.  The current contract expires June 30, 2013.

(This story was updated at 3:29 p.m. with additional information.)