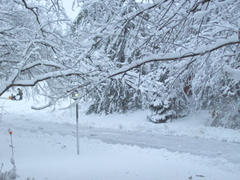 December ended up being a wetter than normal month, and that helped out the drought situation a little. But Tim Hall with the Iowa Department of Natural Resources says it’s harder to make up the precipitation deficit later in the year.

“The challenge this time of year is that average precipitation is still not all that much. So having an above average month in December — while it’s a positive thing — isn’t as good as September, October, November, because they are wetter months in the first place,” Hall explains.

Warmer temperatures are expected, which will lead to snowmelt, but that melt doesn’t help the groundwater levels.

“The amount of water that is in the snow is captured already in the precipitation numbers on the map. So, although it shows above normal precipitation, some of that is caught in the snow,” he says. “So if it melts we’ll see an improvement in stream flow. Because the ground is frozen, it’s not gonna help the soil moisture much. Everything we’ve got on the ground is going to end up in the system at some point and that will all help.”

Hall says if the warmer temps lead to some rain, it would be less helpful because of the frozen ground. “Now that doesn’t mean that rainfall on frozen ground is all bad, because that moisture will end up in streams and rivers. And that water will get into the sand and gravel around rivers, and that’s where a lot of communities get their drinking water,” Hall says.

“So that certainly helps, but it’s not going to help the soil moisture part. We are going to have to wait for the ground to thaw, and then get some moisture on top of it.” The U-S Geological Survey figured flow levels in Iowa’s streams and rivers were at an average of 60-percent of normal during 2013.

Hall says that led to a lot of worries from communities that get their drinking water from rivers. Those worries are not over yet.

“Although the conditions have improved somewhat for some of those communities, a lot of that improvement is due to the fact that the demand for the water is down, not necessarily that the amount of water in their wells is up,” Hall explains.

“So a lot of those communities are kind of nervous about what is going to happen in the spring when the weather warms up and the demand starts to rise if we don’t get some improvement in the supply side of the water.” Most of the state remains in extreme to moderate drought conditions.