You are here: Home / News / Governor says many of his top managers deserve higher pay (AUDIO) 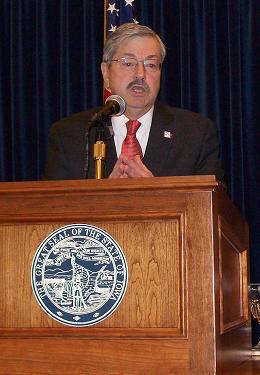 Governor Terry Branstad is defending the pay and benefits he’s approved for state agency managers, including the $30,000 bonus for his economic development chief.

On Friday the president of the union that represents the largest share of state workers accused Branstad of having a double-standard, as Branstad’s asking unionized state workers to accept a pay freeze and pay 20 percent of their health care premiums, while the governor’s top state agency managers have gotten a four-percent raise and some have gotten bonuses.

“Many of the people that I asked to become department directors in state government took significant pay cuts to take on those positions,” Branstad said this morning, “and they received no increase in the first year that I was governor while the state employees under the union contracts did get increases.”

“Debi Durham…took a significant pay cut and took on the responsibility of two jobs (to become head of the Iowa Economic Development Authority and the Iowa Partnership for Economic Progress) and because the legislature did not give us an appropriate salary that met those additional responsibilities, we did provide a bonus there,” Branstad said.

Branstad told reporters he plans to give just one state agency manager a bonus this year, but he revealed no other details. Branstad’s representatives began private negotiations this weekend with the state employee unions and Branstad hints one union is almost ready to settle on a new, two-year contract.

“We are negotiating in good faith to try to get a reasonable contract,” Branstad said during his weekly statehouse news conference. “I don’t think it’s unfair or unreasonable for me to do what I’ve promised the taxpayers and citizens of Iowa and that is asking state employees to contribute 20 percent toward their health insurance. After all, federal employees pay 25 percent. If you’re been following what private individuals have to pay for their insurance, you know that it’s gone up dramatically.”

Branstad’s not only seeking a pay freeze and more employee contributions to their health care plans, he’s asking for other union concessions. The governor would like to change the grievance process for fired employees, for example. A Des Moines Register report this weekend chronicaled instances in which fired state workers ended up being rehired after the workers challenged their firings through the provisions in their collective bargaining agreement.