You are here: Home / Human Interest / Iowa’s “Antique City” to be featured on PBS program 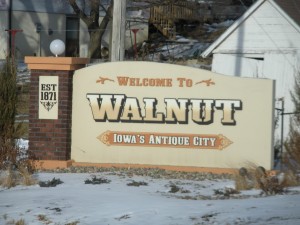 A small western Iowa town referred to as “Antique City” will be featured in a popular nationally televised program tonight. Dave Bradley, owner of Corn Country Antiques in Walnut, says the producers and crew with the “Market Warriors” program on PBS paid a visit to Walnut last June, during the annual AMVETS Antique Show.

The one-hour program features four experts on antiques who crisscross the country, in search of items to buy at flea markets and antique shows. Bradley says their goal is to score the biggest profit in each show’s final auction segment. “They have ‘X’ amount of dollars to spend and they have different items they have to buy in different categories. They take those items off to auction, generally in California, and see who makes the most money,” Bradley explained.

The experts don’t actually pocket the profits. Instead, the money helps cover the program’s production costs.

Producers of Market Warriors selected Walnut because of the AMVETS Antique Show held each Father’s Day weekend. “Our AMVETS Show is one of the best (antique) shows in the country,” Bradley said. “Our AMVETS do a real good job of filtering out non-antique items, so it’s a good show for the purists to come to.”

Walnut, located just off Interstate 80 in Pottawattamie County, was granted the official title of Antique City in 1985 by Governor Branstad. The town has a population of roughly 900, but is home to 15 separate antique shops.