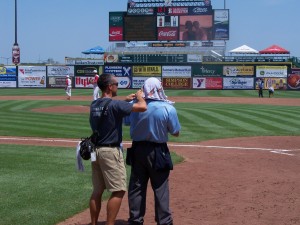 State Climatologist Harry Hillaker is reporting 2012 was Iowa’s third hottest year on record. The statewide average temperature through the year was 51.9 degrees. That was 3.8 degrees above normal, but just over one-degree cooler than 1931, the hottest year ever in Iowa.

Nationally, government meteorologists say 2012 was the hottest year on record in the United States with an average temperature of just over 55 degrees. In addition to the heat, Iowa and nearly two-thirds of the country endured a summer-long drought.

Hillaker says 2012 was Iowa’s 19th driest year in 140 years of record keeping. The statewide average precipitation last year was 26.31 inches, nearly 9 inches below normal. The record for Iowa’s driest year was set in 1910 at 19.98 inches of precipitation.

Farmers and others who desperately needed rain last summer may find it hard to believe 2012 was only the 19th driest in state history. But, Hillaker notes above normal precipitation was recorded statewide in the months of February, April, October and December. July, meanwhile, was extremely dry and hot.

Hillaker says it the 5th driest July in Iowa history (1st-1936) and the month trailed only 1936 and 1901 for the hottest July in state history. The month of March was the warmest ever, 51.1 degrees on average, besting the previous record set in March 1910 by nearly two-and-a-half degrees.

There was yet another unusual weather statistic in Iowa in 2012. You might call it a silver lining of the drought – as there were very few tornadoes.

Hillaker says there were only 16 confirmed tornadoes in Iowa last year and they all happened before the end of May. “Which is pretty amazing considering June is usually our busiest tornado month of the year,” Hillaker said. “That 16 annual total for tornadoes is, at least, our lowest since 1963.”

Iowa averages 47 tornadoes per year. A record 120 tornadoes touched down in Iowa is 2004.